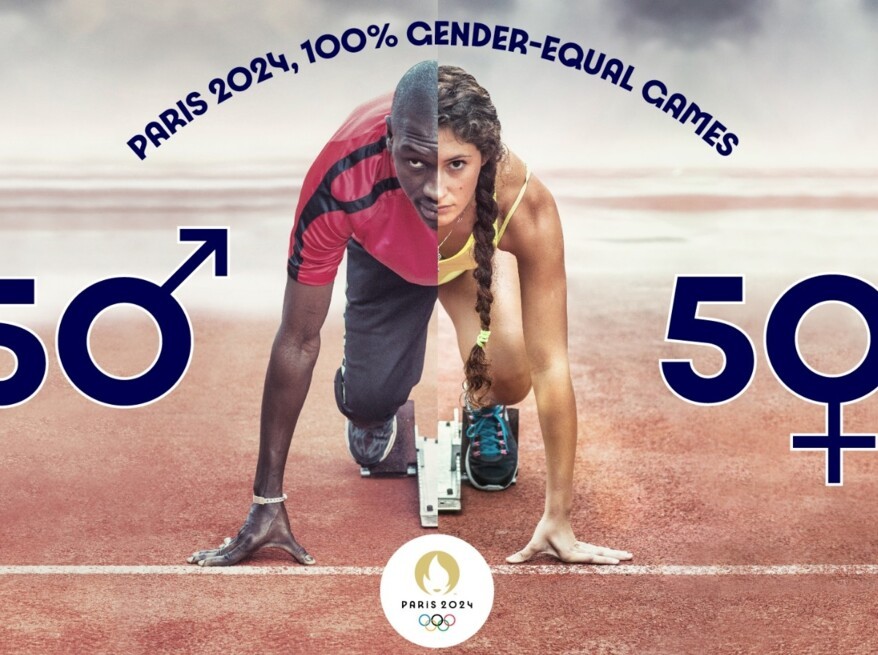 Paris 2024 is delighted with the IOC Executive Board’s decisions from 7 December 2020. In addition to the historic announcement of perfect parity between female and male athletes, for the first time in the history of the Games, the IOC unveiled the sports programme for the Paris 2024 Games, with eight new events, while confirming the inclusion of the four additional sports proposed by Paris 2024. Sound stewardship, creativity, gender equality and youth are core features of the Paris 2024 sports programme.

For the first time, perfect parity

The IOC confirmed that Paris 2024 will be the first Games to achieve strict parity between women and men, among the 10,500 athletes who will be taking part in the Paris 2024 Olympic Games.

Both eagerly awaited and expected for Games that reflect our society, this parity builds on the change already set in motion by the IOC, because women will represent 48.8% of the athletes in Tokyo next year.

Looking back in history, it was in Paris, in 1900, that the Olympic Games opened up to women competitors for the first time. There were 22 women at the time, compared with 975 male athletes (representing 2%). As a cradle of the Olympic spirit, with the actions of Baron Pierre de Coubertin, France has often been the driving force behind innovations that have become a lasting part of our Olympic history. For instance, the first Olympic Village was built for the Paris Olympic Games in 1924, while the first mascot was unveiled for the Grenoble Winter Olympic Games in 1968.

Close to nature, spectacular and modern, these new events are closely aligned with the identity of the Paris 2024 Games.

Adapted to a post-Covid 19 world and the shared ambitions of the IOC and Paris 2024 for Games that are focused more on sustainability and sound stewardship, they systematically replace another event from the same sport that was already part of the Games programme, without any additional athletes, are integrated into existing venues, and respect or even contribute to full gender parity for the Paris 2024 Games.

Determined to limit the costs for building the Games in a post-Covid 19 world, the IOC also announced that the Paris Games will strictly respect the total quota of 10,500 athletes from the Olympic Charter (including the four new sports on the programme), while reducing the total number of events, down from 339 to 329.

Four sports that reflect their era

The IOC’s approval of the four additional sports proposed by Paris 2024 - breaking, sport climbing, skateboarding and surfing - brings to an end the process launched in February 2019 working with the International Federations concerned.

Sports that are both athletic and creative, means of expression and lifestyles, that take place outside of traditional stadiums, in cities and in nature, and that are shared on social media. Sports that deliver perfect parity and will welcome a limited number of athletes, for responsible and sustainable Games.

The Paris 2024 concept will enable each of these four new sports to be held at iconic locations, highlighting their performance and identity.

The surfing events will take place at a legendary surfing spot, Teahupo’o in Tahiti, which is quite simply the best surfing destination in the world at that time of year.
An Olympic Park set up at the heart of Paris, on Place de la Concorde, will host various events, including breaking and skateboarding, as well as cultural events (shows, concerts and live entertainment), for a complete celebration.

The climbing events will be held in Le Bourget and will make it possible to leave a legacy to develop participation in climbing in Seine-Saint-Denis. To better promote this sport, the competition format is changing: two spectacular and complementary disciplines (speed and combined bouldering/lead) will be part of the programme for the Paris 2024 Games, compared with just one combined event in Tokyo.

The approval of the sports programme is a major milestone that will enable the athletes to plan ahead and prepare for the Paris 2024 Games under the best conditions.

Tony Estanguet, Paris 2024 President: “With the sports programme unveiled today by the IOC, Paris 2024 is consolidating the core foundations that its identity is built around: taking a significant step forward for society with, for the first time, the same number of women athletes as men; focusing on creativity and youth, with new sports and spectacular new events; ensuring sound stewardship, with a reduction in the total number of athletes and events on the programme. More than ever, the conditions are in place to make Paris 2024 the Games for a new age.” 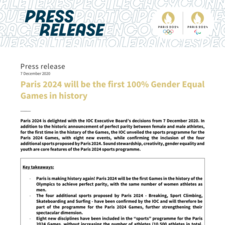 Press release - Paris 2024 will be the first 100� Gender Equal Games in history.pdf