Mark your calendars! The dates for the first phase of sales of the "multi-ticket" packages for the Olympic Games are now out.

Paris 2024 Club members selected at random will have priority access to the sale. Register now!

Sales opening of the "multi-ticket" packs

For the first phase of the official Olympic ticketing sale, fans around the world will be able to purchase packs. A pack consists of three competition sessions. Those selected at random will be able to build their own pack, choosing the events and their favourite sports within the limits of the available seats, and thus customise their Olympic experience according to their preferences.

A ticketing programme accessible to all

Paris 2024 has developed a ticketing programme to make this unique, "century-old" experience accessible to as many people as possible:

In recognition of Visa’s long-standing partnership with the Olympic and Paralympic Games, Visa is the Official Way to Pay 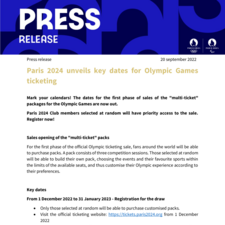