The first phase of the ticketing process for the Olympic Games Paris 2024 will open on 1 December giving fans around the world their first opportunity to secure tickets for the highly anticipated Paris 2024 Games.

Those interested in experiencing the Games in person will be able to begin their journey to Paris by signing up to the draw on https://tickets.paris2024.org between 1 December and 31 January for the first sale of tickets.

Tickets will be available for all Olympic venues (except for surfing and the Opening Ceremony) with fans able to enjoy world-class sport set against the backdrop of France and Paris’ world-famous landmarks from breaking at the Place de la Concorde to beach volleyball at the Eiffel Tower Stadium. Fans will be able to personalise their Games experience through “Make Your Games” packs ensuring their time in Paris and in other venues around France is fully customised.

To find out more about the ticketing process, click on the following link : https://sharing.oodrive.com/share-access/sharings/dlGv6K0Q.fk3qkWkq

For the first time in Olympic history, tickets will be sold exclusively on a single, centralised and digital platform which will be open to all fans at the same time.

Through this platform, nearly 10 million tickets will be available for the Olympic Games, with one million of these priced at just €24 and almost half priced at €50 or less for the general public. Paris 2024 is committed to accessible and affordable Games, and these ticket prices are available across the 32 sports on the Olympic Games programme that are for sale (with the exception of surfing which will not be sold). For as little as €24 fans could be watching athletics in the Stade de France, archery at Les Invalides and equestrian events at Versailles.

“We really wish to make Paris 2024 the first Games Wide Open, and we are fully dedicated to bringing this concept to life,” said Tony Estanguet, President of Paris 2024. “We are so looking forward to the prospect of Paris sharing its iconic locations and venues with fans, in order for them to feel the emotion and magical atmosphere that full stadiums will provide. It is not just the athletes who are getting ready for the Games, it’s the spectators too, and their journey starts now!”

The introduction of “Make Your Games” packs

For this first phase of ticket sales, fans will be able to purchase “Make Your Games” packs of tickets to curate their own ideal Olympic experience.

Each “Make Your Games” pack of tickets, includes three sessions assembled according to the purchaser’s preferences. To create a pack an individual will be able to:

Choose three sessions from all the sports on the programme, subject to availability and choice.

Select up to six tickets for each session.

Packs are designed to be flexible to suit the purchasers’ needs, whether they are attending on their own, with friends or as a family.

A maximum number of 30 tickets will be allowed per account in all Olympic sales phases combined.

The introduction of a draw

From 1 December 2022 to 31 January 2023, people around the world will be able to register for the packs draw. Those who are successful in the draw will be allocated 48-hour timeslots between 15 February and 15 March 2023 to purchase their tickets. The use of a draw to allocate purchasing timeslots is a new feature for the Games that ensures a friendlier user experience for those selected.

Fans will be able to participate in a draw for the first two phases of the ticketing process which are broken down into:

1 December 2022 – 31 January 2023 18H CET: Register for your account through the official ticketing website https://tickets.paris2024.org and enter the draw for “Make Your Games” packs

13 February – 15 March 2023: If successful in the draw, access the ticketing website during your allocated purchase timeslot and buy your “Make Your Games” packs.

March – May 2023: Apply for a draw for single ticket sales

Tickets for the Paralympic Games Paris 2024

In the autumn of 2023, more than three million tickets will go on sale for the Paralympic Games.

In recognition of Visa's long-standing partnership with the Olympic and Paralympic Games, Visa is the Official Way to Pay.

Set up in January 2018, Paris 2024 is headed by Tony Estanguet, three-time Olympic champion and member of the IOC. It is run by a Board of Directors, on which sit all the founding members of the project: the CNOSF, Ville de Paris, the French Government, the Île-de-France regional authority, the CPSF, the Métropole du Grand Paris, the Conseil départemental de Seine Saint-Denis, representatives of the local authorities involved in the Games, civil society and corporate partners.

Buy only from official sources

By buying tickets or hospitality packages outside the official channels, the buyer runs the risk that tickets or packages are not delivered to them or are cancelled by the Paris 2024 Organising Committee in accordance with the terms and conditions. In addition, all buyers are informed that unauthorised sale or re-sale of tickets outside the official channels constitutes an offence under French law.

Tickets allow fans to attend one or more events during the Olympic Games and are sold stand-alone. They are only available through the official P24 ticketing website.

Hospitality offers standard or customised packages that include guaranteed tickets, access to on-site hospitality venues, as well as travel, accommodation or other activities. There are only available through On Location and its subdistributors network. 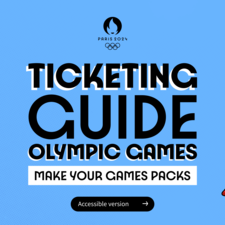 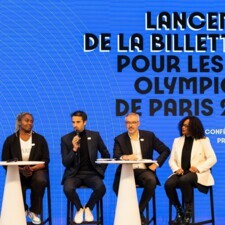