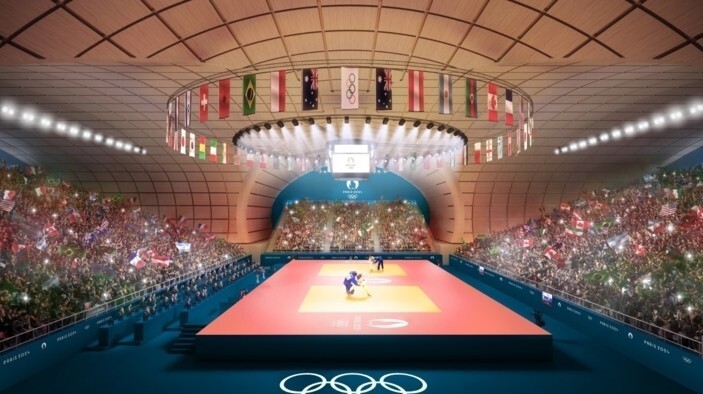 Paris 2024 presents a new concept that reinforces its existing strengths Following a six-month stakeholder engagement, a new venue masterplan for the Paris 2024 Olympic and Paralympic Games was presented during the Paris 2024 Executive Board meeting on 25 November 2020. This optimised concept consolidates the project’s existing strengths: it enables certain venues to be shared, allowing for budget savings and even tighter control of funds, while retaining Paris 2024’s spectacular dimension, its focus on environmental responsibility and strong roots in local communities, particularly in Seine-Saint-Denis. Based on these proposals presented to the Executive Board, exchanges will continue with the International Federations, the IOC and the IPC. The plans will be submitted to the Paris 2024 Board of Directors on 17 December.

Evolving the concept while retaining the core features of the Games

Paris 2024 committed to review and optimise its venue plan for the Olympic and Paralympic Games. This initiative was launched in spring 2020 as a major engagement exercise involving all key stakeholders.

Paris 2024 applied the following criteria for this review:

In this context, the decision was taken to focus on sharing competition venues, optimising the use of existing venues and reducing the number of temporary venues.

Taking constraints into account and capitalising on new opportunities

This new Olympic and Paralympic concept retains the spirit and excellence that were central to the concept presented during the bid phase. The main change concerns the distribution of sports across the venues.

Working closely with public stakeholders and sports federations, the concept review has made it possible to share existing facilities. Certain venues will be able to host multiple sports, and in order to be more coherent, new venues will host the same sports for both the Olympic Games and the Paralympic Games. For instance, Para table tennis will be held at the same venue as the Olympic table tennis events, as will also be the case for both Para judo and Para taekwondo.

This better use of resources will avoid the need for two additional temporary venues - the Le Bourget Arena and the Olympic Aquatics Stadium. It will also make it possible to reduce the total number of venues, by withdrawing from the plan the Stade Jean-Bouin and switching from eight to seven stadiums for the football competitions. The sharing of facilities will therefore deliver budget savings and reduce the carbon impact of the Games.

A concept with reinforced strengths

The concept also retains its efficiency (80% of the venues less than 30 mins from the Olympic and Paralympic village), its compact design (24 sports within 10km of the village; 29 within 30km), and its accessibility – each venue has public transport links and is accessible for people with disabilities.

Lastly, the concept respects regional balances. More specifically, Seine-Saint-Denis is now positioned more than ever at the heart of the project. It will still host five Olympic sports: athletics, aquatic events (artistic swimming, diving and water polo), climbing, rugby sevens and shooting. Thanks to regular communication with all the stakeholders involved, an additional permanent sports facility (climbing) will be built and left as a legacy.

The proposals presented to the Executive Board will be discussed with the International Federations, the IOC, and the IPC. On 17 December, they will then be submitted to the Paris 2024 Board of Directors, as part of a meeting that will also confirm the seven host cities for the football competitions (the selection process is ongoing). Despite the health context, Paris 2024 is therefore on track to meet the schedule it previously set out.

The meeting will take place after the IOC has released the sports programme for the Paris 2024 Olympic Games. Approval of the four new sports proposed by Paris 2024 and the announcement of the events and number of athletes making up the programme will take place during the IOC Executive Board’s meeting from 7 to 11 December. 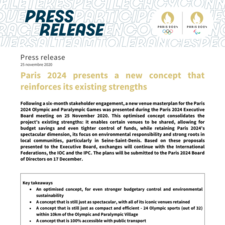