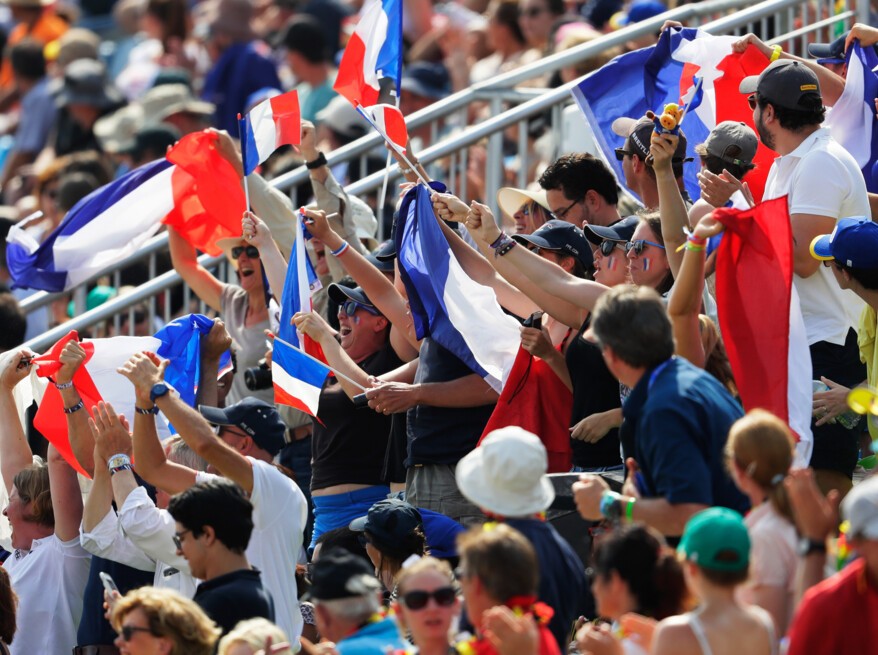 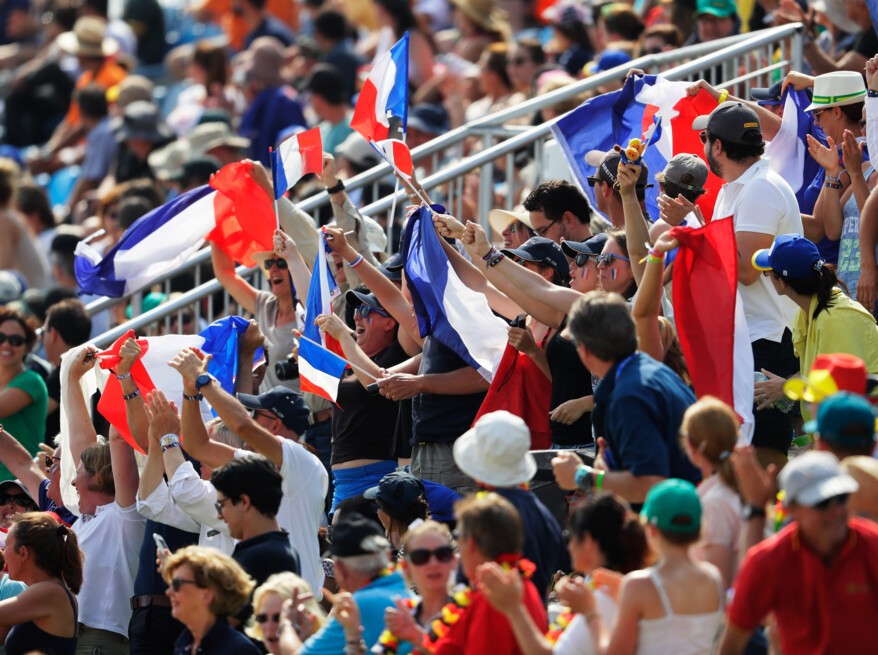 Paris 2024 has published its events competition schedule, along with new information on ticket pricing. A chance to look forward, two years before the Games begin. The countdown continues! With the first medals being awarded the day after the Opening Ceremony, a packed middle weekend, the swimming and athletics finals in the evening, placing women in the spotlight, the calendar was designed to let fans live the full experience of the Games!

With two years to go before the Olympic Games Opening Ceremony on 26 July 2024, Paris 2024 has released its events competition schedule, marking a key milestone in the Paris 2024 project. Drawn up in close cooperation with all the International Federations, the IOC and OBS (which will produce the TV coverage of the Games), the schedule provides a detailed breakdown of the sports programme of the Paris 2024 Olympic Games.

It’s official! The 32 sports on the Paris 2024 Olympic Games programme now know their events schedule, with 329 events spread across 18 days of competition from Wednesday 24 July to Sunday 11 August.

The schedule, presented sport by sport, is attached to this media release in a PDF document. This provisional timetable is subject to change until the conclusion of the Games.

The events schedule is designed to ensure that the Games generate spectacular moments from the very beginning! The day after the Opening Ceremony – Saturday 27 July (D+1) – will see the first finals, and medals awarded, in eight different sports: cycling with the men’s and women’s time trial on the streets of Paris (from 2.30 to 6.30pm), judo (from 4pm), fencing (from 7pm), diving (from 11am), rugby (from 2.30pm), shooting (from 10.30am), swimming (from 8.30pm) and skateboarding, which will be the first urban sport to take the stage, with the men’s street final starting at 5pm.

All swimming and athletics finals in the evening

All the finals of the swimming events held at the Paris La Défense Arena pool, and the athletics finals at the Stade de France, will take place in the evening, along with many other memorable moments that will be written into the Games history books. Swimming finals will begin at 8.30pm (apart from the last day, when they start at 6.30pm) and athletics at 7pm.

The Paris 2024 detailed events schedule paves the way for a fabulous midway weekend that is sure to delight those lucky enough to have tickets and TV viewers all over the world. For 14sports, these two days – Saturday 3 and Sunday 4 August (D+8 and D+9) – will be synonymous with finals, and therefore medals: tennis, table tennis, judo, fencing, athletics, archery, shooting, cycling (with the road races starting at 11am on 3 August for the men and 2pm on 4 August for the women), golf, equestrian, rowing, artistic gymnastics, badminton and swimming.

Women in the spotlight

The schedule is carefully designed to strike a fair balance between the genders, with alternating men’s and women’s team sport finals. This gender balancing for ‘prime-time’ sessions also applies to individual disciplines in sports such as judo, canoe, athletics and table tennis.

For example, for the first time since it was added to the Games programme in Los Angeles 1984, the women’s marathon will bring the athletics programme to a close on 11 August, the day after the men’s final, a few hours before the Closing Ceremony.

Similarly, for the first time since table tennis became an Olympic sport in Seoul 1988, a women’s event (the women’s team final) will bring the table tennis programme to a close in Paris on 10 August.

On the last day of the Paris 2024 Olympic Games, Sunday 11 August, women will be particularly in the spotlight, with the wrestling, weightlifting and track cycling competitions all concluding with women’s events. The women’s marathon and the women’s basketball final will also be held that day.

A ticketing strategy that offers numerous opportunities to experience the Games

At the same time as the events schedule, Paris 2024 has released new information about the ticket pricing structure, which will be officially launched when the ticket draw opens in December.

With over 13 million tickets on sale (10 million for the Olympic Games and 3.4 million for the Paralympic Games), Paris 2024 is keen to give everyone a chance to enjoy the unique experience of attending the Games in Paris, Île de France and throughout France by creating an affordable pricing structure that enables it to meet its budgetary objectives.

The chance to watch the Games in person in France is a once-in-a-lifetime opportunity: powerful emotions, breath-taking feats at some of France’s most iconic sites, and the chance to connect with the athletes and carry them to victory.

The Paris 2024 ticketing strategy meets the expectations of spectators from all walks of life, from France and across the world, families, young people, passionate fans or those who are simply curious and want a piece of the action, enabling them to cheer on the world’s greatest athletes, experience unique emotions and make lifelong memories.

Watch every Olympic sport for as little as €24

These prices, which are extremely affordable for an event the size of the Olympic Games, have been made possible thanks to the adoption of a special pricing structure: the highest-priced tickets, which make up 15% of the tickets on sale to the general public, will generate almost 50% of Paris 2024 ticketing revenue. Individual tickets for the Paris 2024 Olympic Games will cost between €24 and €950 (excluding the ceremonies). The highest fares will be €950 and represent about 0.5% of the total volume of tickets to the general public.

With the first events scheduled to take place on 24 July 2024, before the Opening Ceremony, spectators will be able to watch the opening football matches in Paris and other French cities for between €24 and €50, or rugby matches at the Stade de France for between €24 and €100. Tickets for the first women’s handball matches at the South Paris Arena (Hall 6 of the Parc des Expositions) the following day will cost from €24.

A tailor-made experience with three-session packages from €72

For the first time, the general public will be able to assemble their own ticket package by choosing three from a huge selection of different sessions. For example, with prices starting at €72, spectators will be able combine athletics, handball and rugby, gymnastics, judo and water polo, two sailing sessions and a football match in Marseille, or golf, equestrian and mountain biking in Yvelines.

These packages will go on sale in February 2023.

See the first medals won for €24

Just a stone’s throw away, Place de La Concorde will host the urban sports, including the first ever Olympic breaking final (tickets priced between €45 and €130), a fast and furious 3x3 basketball final (€50 to €160) and the park skateboarding final (€45 to €130).

At yet another iconic Olympic venue, tickets for the early rounds of the archery events on the Esplanade des Invalides will be priced between €24 and €100, while tickets for the finals will cost between €50 and €160. The Eiffel Tower Arena, a temporary structure at the foot of the famous Paris landmark, will be the venue for the beach volleyball events, where ticket prices will range from €24 to €120 for the first few days, then from €95 to €390 for the finals.

All sailing tickets in Marseille cost €24

Tickets for the fourth and final day (when the medals are always decided) of the golf competitions being held at the Golf National in Saint-Quentin-en-Yvelines will cost between €80 and €150.

Tickets for the early stages of the tennis events at Roland-Garros will be available for between €24 and €120, with final tickets costing between €120 and €390.

All team sports available from €24

Team sports enthusiasts will be spoilt for choice, with French national teams hungrier for success than ever before. Tickets for a daytime for a volleyball basketball session at the Arena Paris Sud will be offered at prices between €24 and €120. A Hockey session at the Stade Yves-du-Manoir can be experienced from €24 (and up to €70). Handball quarterfinals in Lille will start from €45, with a final between €85 and €260. The men's basketball quarterfinals will start at €80 at the Arena Bercy.

The iconic 100m finals in athletics (Stade de France) and freestyle swimming (Paris La Défense Arena) are always hotly anticipated and, therefore, among the most in demand where tickets are concerned. Fans hoping to witness these historic Olympic moments will pay between €120 and €950. Tickets for the all-around gymnastics finals at the Bercy Arena – also among the most popular events of the Games – will cost between €120 and €660.

The full pricing structure for general public tickets will be published in December 2022, when the draw for access to ticket packages will open.

Anyone can already increase their chances of getting tickets by joining the Paris 2024 Club free of charge. Paris 2024 Club members have the opportunity to win priority access when tickets go on sale, as well as receive all ticketing information.

The Paris 2024 Hospitality programme will include a wide range of products (including tickets) for including hospitality experiences at the heart of the competition venues and in city-centre locations, as well as accommodation deals to all type of guests.

For more information about the Paris 2024 Hospitality and Travel programme, visit  https://onlocationexp.com/olympics/paris

The Paris 2024 Paralympic Games detailed events schedule will be published in December 2022.

The Olympic and Paralympic Games are the greatest sporting event in the world, with unparalleled media impact. They bring together 10,500 Olympic athletes and 4,350 Paralympic athletes, respectively from 206 and 182 delegations, across five continents. They are watched by over 13 million spectators and billions of television viewers across the world, across a total of over 100,000 hours of TV broadcasting. They are without equal in sporting, economic and cultural events throughout the world, and this power helps to further their impact. 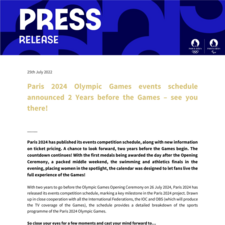