True to its ambition to open the Games to as many people as possible, Paris 2024 has created a number of initiatives so that those who may normally miss out on major sporting and cultural events can attend the Games in person. Paris 2024 is launching a charitable ticketing scheme in partnership with the French charity ‘Secours Populaire’. Everyone who buys tickets for the Paris 2024 Olympic and Paralympic Games will have the opportunity to donate €2 to enable people living in low-income households to experience this unique event for themselves in 2024.

From the start, Paris 2024 and its President, Tony Estanguet, have sought to make the Paris 2024 Games open and accessible to as many people as possible. This desire to share the unique emotions of the Games is particularly reflected in the Paris 2024 ticketing programme: firstly, in the affordable ticket price structure, with tickets for all sports available for as little as €24 for the Olympic Games and €15 for the Paralympic Games, and with around 50% of public tickets costing €50 or less; secondly, in the direct funding of the purchase of 100,000 tickets for disadvantaged members of society; and, finally, in the opportunity given to the host local authorities to acquire one million tickets to support their social projects linked to the Paris 2024 Games.

As the final link in this chain of solidarity, Paris 2024 has devised a charitable ticketing scheme in consultation with entrepreneur Alexandre Mars, Paris 2024 ambassador and board member. The scheme, which gives members of the public the chance to take part in this great display of togetherness, will enable people living in low-income households to experience the Olympic and Paralympic Games first-hand. It will benefit people who would otherwise struggle to attend the Games and would only watch on TV. Whether they are families, young people, disabled or senior citizens, the lucky beneficiaries will therefore be able to participate in this hugely popular event, as it is being staged in France for the first time in 100 years.

An opportunity to donate with every order placed

The charitable ticketing scheme, which will be launched when the sale of Olympic Games ticket packs opens on 15 February, will operate during every phase of the public ticketing programme.

Every purchaser will be invited to make a fixed donation of €2 when they pay for their tickets. The money donated will be used to pay for the tickets and travel costs of the scheme’s beneficiaries.

The funds collected will be given to the French charity ‘Secours populaire’, which has had close links with sport and experience of charitable ticketing programmes over many years. ‘Secours populaire’ widens access to sport by covering the cost of annual registration fees, sports equipment, swimming lessons and sports holidays. It also enables thousands of people to attend major sports events, giving them the chance to make lifelong memories and discover new passions and vocations.

Tony Estanguet, President of Paris 2024: “We want as many people as possible to be able to experience the Games and to feel the emotions and sense of togetherness that they bring. To achieve this goal, Paris 2024 has launched a number of initiatives to enable people living in low-income households, who are often excluded from major sports events, to attend the Paris 2024 Games in person. This charitable ticketing scheme, which we have created in partnership with entrepreneur Alexandre Mars and the French charity ‘Secours populaire’, will help us to provide Games Wide Open by giving the whole public the chance to play a part in this great show of solidarity.”

Thierry Robert, National Secretary of Secours populaire: "Secours Populaire is delighted to benefit from the charitable ticketing scheme initiative. The scheme will offer young people and people in low-income households the chance to experience the emotions of live sport at the Olympic and Paralympic Games. For 78 years, sport has constantly been a key pillar of our action to support solidarity.
In collaboration with many partners and sport federations, Secours Populaire offers a wide range of benefits from sports holidays, swimming lessons, annual memberships, sports equipment discounts, participation in major sports events. and so on. These initiatives to promote access to sport reflect our ambition: to democratise sports activities, which are recognised for having various benefits and yet are a source of great inequality. Working towards this is an honour for the 90,000 volunteers of the association who devote themselves in the 1300 solidarity centres and offer their help to 3.5 million people in France and throughout the world. With your support, this solidarity initiative will give Secours Populaire the resources to further act and expand its action around sport.

Alexandre Mars, Paris 2024 ambassador and board member: “I have been involved in the Paris 2024 Olympic and Paralympic Games project for six years now, initially as Chair of the Sport and Society Committee during the bid phase, and now as ambassador and board member. I am proud to see this charitable ticketing project come to fruition. Along with the Paris 2024 organisers, our shared ambition is to ensure these Games leave a positive, long-lasting legacy based on the values of community and solidarity.”

The mission of the Olympic and Paralympic Games Paris 2024 Organising Committee, in accordance with the host city contract signed between the International Olympic Committee (IOC), the Comité National Olympique et Sportif Français (CNOSF – French National Olympic and Sporting Committee) and the Ville de Paris municipal authorities, is to plan, organise, fund and deliver the Olympic and Paralympic Games Paris 2024. The Olympic and Paralympic Games are the greatest sporting event in the world, with unparalleled media impact. They bring together 10,500 Olympic athletes and 4,350 Paralympic athletes, respectively from 206 and 182 delegations, across five continents. They are watched by over 13 million spectators and 4 billion television viewers across the world, across a total of over 100,000 hours of TV broadcasting. They are without equal in sporting, economic and cultural events throughout the world, and this power helps to further their impact. Set up in January 2018, Paris 2024 is headed by Tony Estanguet, three-time Olympic champion. It is run by a Board of Directors, on which sit all the founding members of the project: the CNOSF, Ville de Paris, the French Government, the Île-de-France regional authority, the CPSF, the Métropole du Grand Paris, the Conseil départemental de Seine Saint-Denis, representatives of the local authorities involved in the Games, civil society and corporate partners. 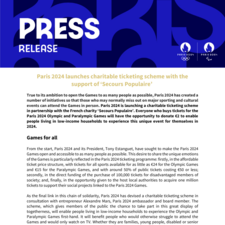