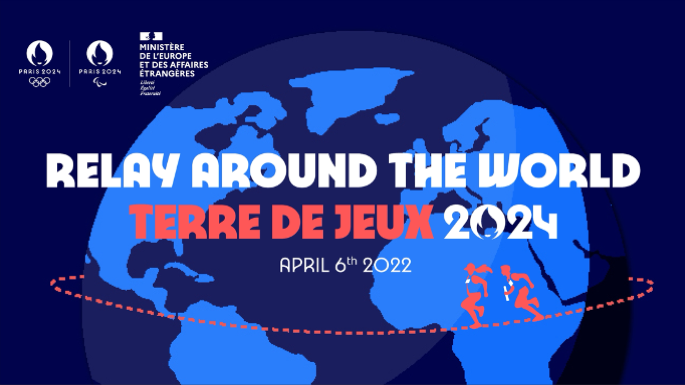 On 6 April 2022, on the International Day of Sport for Development and Peace, Paris 2024 and the Ministry for Europe and Foreign Affairs are organising a 24-hour sporting relay which will pass through all continents and all time zones, involving the general public and figures from the world of sport, by engaging embassies and the overseas French departements, regions and territories (DROM-COM) bearing the ‘Terre de Jeux 2024’ label.

24 hours of sport around the world

In a context where we are reminded, daily, of the importance of forging connections between different peoples, sport is one of the last remaining human activities which can break through language barriers, bridge cultural divides, and unite those with competing interests. For this reason, on 6 April 2022, Paris 2024 and the Ministry for Europe and Foreign Affairs intend to celebrate the power of sport to bring people together, through an unprecedented initiative.

In 44 overseas countries and territories, the ‘Terre de Jeux 2024’ embassies and DROM-COMs will be organising a sporting event, in order to take part in the relay, which will cross all continents and all time zones. The event will begin in Fiji in the Pacific, and cross Oceania, Asia, Europe, Africa and the Americas, before finally returning to the Pacific, in French Polynesia.

Throughout the day, each ‘Terre de Jeux 2024’ will organise a 1-hour-long sporting event, kicking off at 09:00 AM local time. Once each event is finished, the baton will pass to the embassies and DROM-COM in the next time zone, who will stage their own event, and so on and so forth for a total of 24 hours. The passing of the ‘baton’ in this global relay will be organised and implemented through social media – Twitter, in particular.

Sporting initiatives and solidarity events in all corners of the globe

Over 8,000 participants, able-bodied and people with a disability alike, will take part in this round-the-world relay, covering a distance of over 22,000 kilometres through the practice of 30 different sports. Approximately 40 athletes across the world will take part – among them Neisi Dajomes, the Ecuadorian weightlifter who took gold at the Tokyo Games, and Maria Mutola, the Mozambican track-and-field medallist (specialising in the 800 metres), who competed at no fewer than six Olympic Games, and won gold at Sydney 2000 should participate.

In its compound – which, only a few months ago, did not even exist – the French Embassy in Libya will be organising a relay race for 4-person teams. In Ghana, the French Ambassador will face off against Samuel Takyi, featherweight bronze medallist at the 2020 Tokyo Games. The French Embassy in Brazil will organise a kayak race on Lake Paranoá, in Brasilia. Guyana will be staging a relay event involving both able-bodied and disabled athletes in a running race, wheelchair race and mountain-bike race. The French Embassy in Uganda is organising a race to raise funds for an NGO that uses sport to rescue young people who are at risk of violence, a life of crime and drug abuse.

French Polynesia – a collective that is hosting some of the events for Paris 2024 – will complete the day with a race to the legendary surfing spot Teahupo’o, which will host the surfing competition for the Olympic Games Paris 2024.

In parallel to the relay, a host of events (exhibitions, sporting outreach activities, roundtables, etc.) will be organised, to highlight the unifying role of sport.

Sport: a force for fraternity

Under the aegis of the United Nations, on 6 April every year, we celebrate the contribution of sport in rising to humanity’s major challenges: solidarity, inclusion, social cohesion, education and healthcare.

Paris 2024 has committed to promoting the social role of sport through various heritage programmes, both in France and internationally.

The purpose of the ‘Terre de Jeux 2024’ label is to spread the energy of the Olympic and Paralympic Games Paris 2024, sharing it with all the territories, communes, departements and regions where the Tricolour is flown, both in mainland France and in the overseas territories, through the French embassies, and bring more sport into everyone’s daily lives.

Paris 2024 has also signed a cooperation agreement with the Agence Française de Développement (French Development Agency) to devise and run projects which use sport to further sustainable development, in France and elsewhere in the world too.

Tony Estanguet, President of Paris 2024: ‘Sport gives us the opportunity to work together, to share things, to push through our own limits and in so doing, become better, together. On 6 April, every embassy and every territory involved in the relay around the world will help to create a moment of conviviality, brotherhood and unity, built around sport. Through this ground-breaking event and thanks to the commitment of our embassies, we are driving Paris 2024’s message of engagement further, broadcasting it out across the entire world. That is the purpose of the label “Terre de Jeux 2024” – to bring people and territories together around the unique impetus of the Games and sport in general’.

Laurence Fischer, Ambassador for sport, Ministry for Europe and Foreign Affairs: ‘On this International Day of Sport for Development and Peace, the Ministry and its diplomatic network throughout the world are working shoulder to shoulder with Paris 2024 to breathe new life into French sports diplomacy. The relay around the world – an unprecedented event – is testament to the firm commitment of our “Terre de Jeux 2024” embassies in the marvel that is the Olympic and Paralympic Games Paris 2024, and our desire, through sports diplomacy, to actively help further sustainable development and human rights internationally.

Press contacts for the Ministry for Europe and Foreign Affairs: presse.dcp@diplomatie.gouv.fr 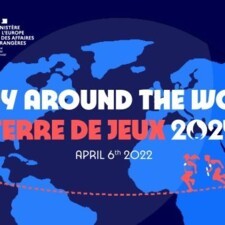 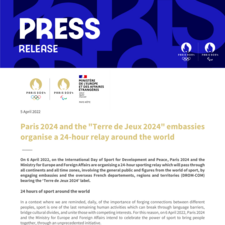