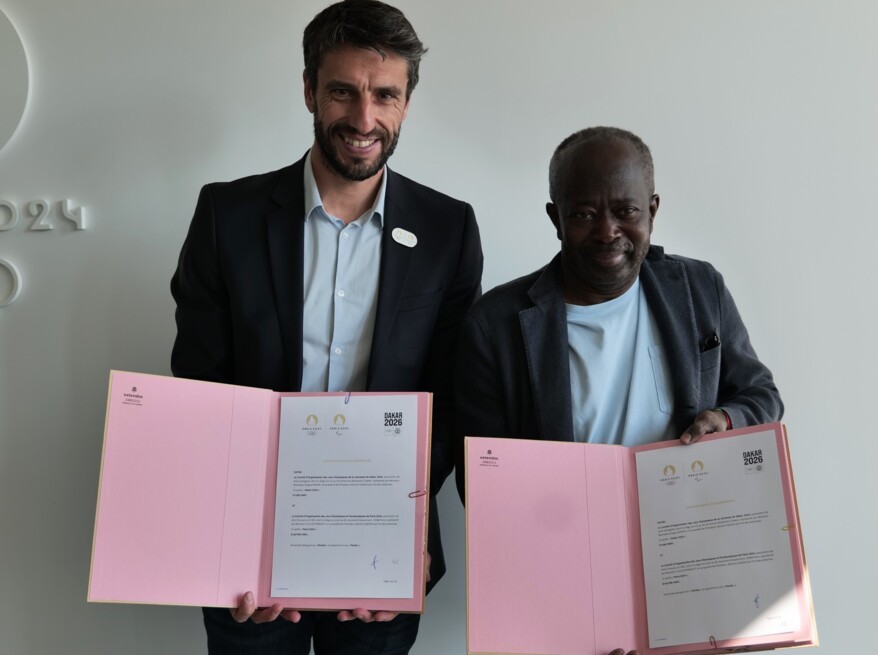 The Organising Committees of the Olympic and Paralympic Games Paris 2024 and Youth Olympic Games Dakar 2026 today signed a collaboration agreement in Saint-Denis, Paris, renewing both organisations’ commitment to the success of the next Youth Olympic Games in Dakar, following the event’s postponement from 2022 to 2026.

The signing of this new collaboration agreement at the Paris 2024 headquarters in Saint-Denis by Tony Estanguet, President of Paris 2024, and Mamadou Diagna Ndiaye, President of Dakar 2026, marks a new stage in cooperation between both Organising Committees. This extends the first agreement signed in 2019 before the decision taken in 2020 by the International Olympic Committee (IOC), Dakar 2026 and Republic of Senegal President Macky Sall to postpone the Youth Olympic Games (YOG) in Dakar to 2026, due to the Covid-19 pandemic.

The postponement of the Dakar Games makes Dakar 2026 a prime beneficiary of the legacy of the Paris 2024 Games and opens up new opportunities. These include observation and secondment programmes that will enable the Dakar 2026 team to fully experience the Games in 2024, as well as the transfer of equipment and human resources between the two organisations.

The rise of the Dioko Alliance

Paris 2024 continues to be the coordinator of the Dioko Alliance, which brings together French institutions committed to the success of the Dakar 2026 Games and their legacy. The agreement consolidates the many projects launched since 2019: renovation of sports facilities, support for the structuring of the Senegalese sports movement and the preparation of athletes, decentralised cooperation projects and the deployment of volunteers within the Senegalese National Olympic and Sports Committee as part of the "Generation 2024" civic service programme.

In 2022, the Alliance is expected to continue expanding. New actors, primarily national sports federations, have already expressed their interest in joining the Alliance to participate in the preparation of the Youth Olympic Games and Senegalese athletes. The next biannual meeting of the Alliance is scheduled for next spring in Paris.

Dakar 2026’s visit to France from 9-10 March provided an opportunity to hold initial working meetings which focused on areas such as public engagement, education and environmental excellence. Representatives of Dakar 2026 also met with the Agence Française de Développement (AFD) and the Clichy-sous-Bois City Council, before visiting the construction site of the Olympic and Paralympic Village of the Paris 2024 Games in the presence of Solideo, the state-owned company in charge of the construction projects for Paris 2024.

Tony Estanguet, President of Paris 2024 said: "The signing of this agreement marks a new stage in our privileged relationship with Dakar 2026. Since the creation of the Dioko Alliance in 2019, we have already launched many projects. The postponement of the Dakar Youth Olympic Games from 2022 to 2026 allows us to further raise the level of ambition of the Alliance and to ensure that a Dakar 2026 Games is a beneficiary of the legacy of the Paris 2024 Games. The next two years will allow us to forge closer links and explore new synergies between our two projects. After Lausanne 2020 and Tokyo 2020, we hope that our agreement with Dakar 2026 marks a new step towards promoting a new model of cooperation between Organising Committees for greater efficiency in the organisation of the Games".

President of Dakar 2026, Mamadou Diagna Ndiaye, expressed his great satisfaction following the signing of this new partnership, which is the manifestation of the solidarity characteristic of the Olympic Movement. "With this agreement, we give meaning and practical content to the sports cooperation that goes beyond our two Organising Committees. We have the opportunity to write a historic page of Olympism together, through memorable Games in Paris and Dakar, which will leave a permanent legacy. Dakar 2026 is about the world's youth being celebrated by Africa and we are delighted that Paris 2024 is contributing to this".

The Paris 2024 Organising Committee for the Olympic and Paralympic Games is responsible for planning, organising, financing and delivering the Olympic and Paralympic Games in Paris in 2024, in accordance with the Host City Contract signed by the IOC (International Olympic Committee), CNOSF (French National Olympic and Sports Committee) and Paris City Council. The Olympic and Paralympic Games are the leading sports event in the world and have a unique media impact, bringing together some 10,500 Olympic and 4,350 Paralympic athletes, respectively representing 206 and 182 delegations from five continents. bringing together some 10,500 Olympic and 4,350 Paralympic athletes representing 206 and 182 delegations, respectively, from five continents. The Games are followed by over 13 million spectators and 4 billion viewers around the world through more than 100,000 hours of TV coverage, Paris 2024 was established in January 2018 and is chaired by Tony Estanguet (three-time Olympic champion and IOC member). Founded in January 2018, Paris 2024 is headed by Tony Estanguet, a three-time Olympic champion and IOC member. It is run by an Executive Board, which brings together all the project’s founding members, namely the CNOSF, Paris City Council, the French State, the Greater Paris regional authorities, CPSF (French Paralympic and Sports Committee), Métropole du Grand Paris, Seine-Saint-Denis departmental council and representatives from the towns and cities involved in the Games, civil society and social partners. 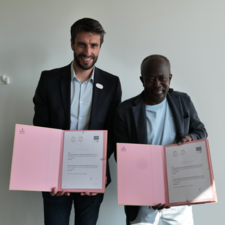 Paris 2024 - Paris 2024 and Dakar 2026 strenghten their cooperation through a new agreement.png 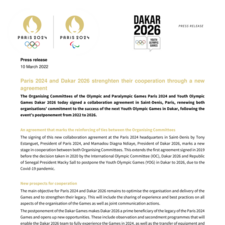 Paris 2024 - Paris 2024 and Dakar 2026 strenghten their cooperation through a new agreement.pdf