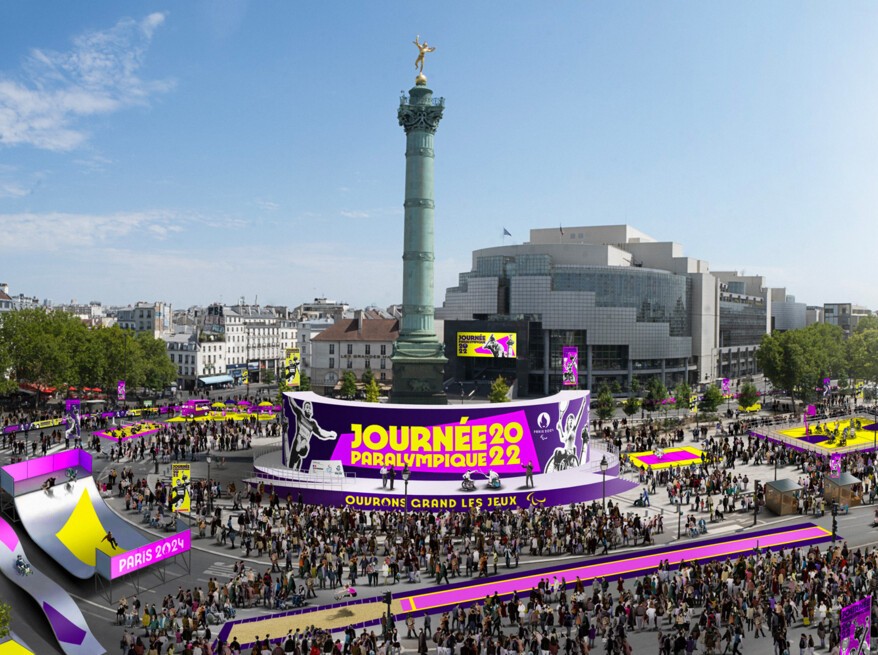 On 8 October, all to Bastille! A sports and festive programme for the first Paralympic Day!

Two years before the Paris 2024 Paralympic Games, the Organising Committee for the Olympic and Paralympic Games Paris 2024, the French State, the French Paralympic and Sports Committee (CPSF) and the City of Paris invite you to the first Paralympic Day on Saturday 8 October at Place de la Bastille in Paris. For amateurs or experienced sportspeople, with friends or family it will be a day to try para-sports for free, to watch sporting displays and meet the athletes!

On Saturday 8 October 2022 from 12 pm to 9 pm, there will be free access to sporting performances, demonstrations, and introductions to over fifteen Paralympic and Para sports disciplines and the chance to meet over one hundred Paralympic and Olympic athletes. All in the heart of Paris!

Two years before the Paris 2024 Paralympic Games, Paralympic athletes will share their passion with young and old alike on the famous Place de la Bastille, which has been transformed into a vast open-air playground for the occasion!

Awe-inspiring sporting displays will be on show, with a long jump track set up in front of the Opéra Bastille. Germany’s Markus Rehm, Paralympic champion (T64) in long jump at London 2012, Rio 2016 and Tokyo 2020 Paralympic Games will try to push his limits and replicate his world record of 8.62 m. He will be joined by Greek athlete Stelios Malakopoulos (T62) long jump world record holder. Watching the spectacle will be France’s very own Arnaud Assoumani (T46/T47,) world record holder and multi-medallist in long jump and triple jump at the Paralympic Games in Athens 2004, Beijing 2008, London 2012 and Rio 2016), Marie-Amélie Le Fur (Paralympic medallist in the long jump at Beijing 2008, London 2012, Rio 2016 and Tokyo 2020), President of the French Paralympic and Sports Committee (CPSF), Tony Estanguet, President of Paris 2024 and Andrew Parsons, President of the International Paralympic Committee (IPC), Amélie Oudéa-Castéra, Minister for Sport and the Olympic and Paralympic Games, Geneviève Darrieussecq, Minister for the Disabled, and Anne Hidalgo, Mayor of Paris.

Demonstrations will take place all afternoon across three sports areas set up on the Place de la Bastille. In a dedicated zone, sports federations will also offer activities and introductions to more than a dozen Paralympic Sports: wheelchair basketball, Boccia, blind football, wheelchair fencing, Para athletics, Para-rowing, Para badminton, Para judo, Para table tennis, Para triathlon and sitting volleyball. Initiations to other Para sports that are not part of the official Games programme will also be offered, such as wheelchair BMX, wheelchair Handball, Paraclimbing and Showdown.

Around 100 Paralympic and Olympic athletes present

Around the July column, on the main stage, Maxine and Michaël Jérémiasz, Paralympic wheelchair tennis champion, gold medalist in doubles at the 2008 Beijing Paralympic Games and presenter of the day, will be joined by the athletes for Para sports shows. Artus will perform some comedy sketches and Fauve Hautot and Sami El Gueddari will perform dance routines. Bboy Haiper, aka Youssef Mecheri, and Bboy Caesar, aka Samy Barkia, will dazzle the crowd with a sensational breakdance show as will acrobat Karim Randé. Music will also be played with a showcase of Myd (DJ set) that will keep the party going until 9 pm!

A fully accessible event in the heart of Paris!

The event will be fully accessible, and the rich and varied programme will allow the greatest number of people, whether they are disabled or not, to enjoy the day.

The Paris 2024 Partners will also be present throughout the day to offer even more activities to the general public: demonstrations, introductions, meetings, wheelchair obstacle courses and many other activities.

All Paris 2024 communications and the media library :

For more information on the Paralympic movement: 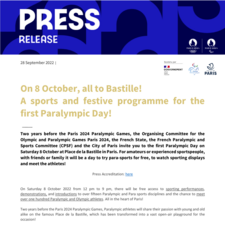 On 8 October, all to Bastille! A sports and festive programme for the first Paralympic Day!.pdf