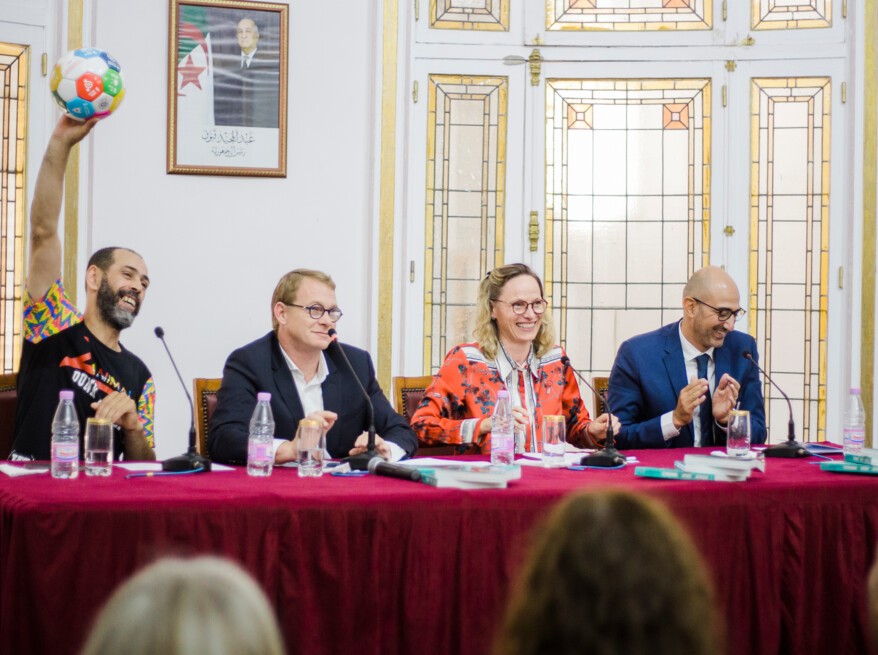 ‘Impact 2024 International’: the 12 winners of the second round of the call for projects announced, alongside the 2022 Mediterranean Games in Oran

The day after the opening ceremony of the Oran Mediterranean Games, Paris 2024 and the Agence française de développement (AFD – French Development Agency), speaking at the Oranie Chamber of Commerce and Industry, announced the winning projects in the second round of the call for projects ‘Impact 2024 International’. The event was attended by representatives of the Algerian Olympic Committee, the French Embassy in Algeria, which bears the label Terre de Jeux 2024, and the 3-time karate world champion Laurence Fischer, Ambassador for Sport. The 12 winning projects were announced at a roundtable on ‘the sports economy and its impacts on sustainable development’. A total of €303,000 will be awarded to the various initiatives in Africa, which place emphasis on gender equality, education, health and inclusion of the disabled, in line with the shared priorities of Paris 2024 and the AFD for the legacy of the Paris 2024 Games.

12 projects selected out of a total of 146 applications

The last Impact 2024 International call for projects, was a great success, supporting 10 worthy projects in Africa. In this second round, aiming to capitalise on that success, applications were received for 146 projects in 30 African countries. The selection committee -composed of Paris 2024 officials, the AFD and experts from organisations such as the European Raid Guild, Sport en Commun, the Ministry of Europe and Foreign Affairs, Plan International, the Decathlon Foundation, the Société Générale Foundation as well as Peace and Sport- has selected 12 projects this year, operating in 9 African countries.

In this second round of funding, there is a particular emphasis on team sports (e.g. rugby, football and volleyball), and there are two new disciplines: circus skills and capoeira. The projects focus mainly on Sustainable Development Goals 3 (Good health and well-being), 4 (Quality education), 5 (Gender equality) and 10 (Reduced inequalities). Aligning with Paris 2024’s legacy priorities, all of these projects bear the ‘Impact 2024’ label.

Among them is the multi-sport project ‘Instilling sport in women as a tool for leadership development’, headed by the association El Gaith, in the city of Bordj Bou Arreridj in Algeria. Thanks to the €35,000 funding awarded by the AFD and Paris 2024, the association will be able to carry out a preliminary study on adapting sports practices to suit women, run awareness-raising campaigns for women’s sports, and establish a programme to enhance teachers’ abilities, and sporting activities in schools for women and girls.

Smail Izerrouken, President of the association ‘El Gaith’, Impact 2024 International winner: ’This funding will help combat stereotypes and encourage women and girls to practice sports, helping to further sustainable socio-economic development. All members of El Gaith, and all those who benefit from the association’s projects  and actions, are very grateful to the AFD and Paris 2024.’

- ‘Improving material conditions for the exercise of circus arts to help the social integration, education and professional training of adolescents’ led by ‘Zip Zap Circus’ in South Africa

- ‘Instilling sport in women as a tool for leadership development’, spearheaded by ‘El Gaith’ in Algeria

- ‘Social Capoeira: sport to build peace and dialogue’ by ‘Gingando pela Paz’ in the Democratic Republic of the Congo

- ‘Bridge the Gap, Sports for All’ by ‘Women Sports Initiatives’ in Tanzania

* Subject to Anti-Money-Laundering and Combating the Financing of Terrorism (AML-CFT) checks.

Are you running a project in Africa which uses sport to promote health, education, equality, inclusion or protection of the environment? Would you like funding or support?

Eligible organisations (associations, foundations, regional collectives, sports clubs, federations, cooperatives, State bodies and public bodies, among others) are invited to submit their ideas for this third round of Impact 2024 International, on the Sport en Commun website, by 23:59 (GMT) on 1 September 2022. There is a tutorial to guide you through how to submit your initiative. Organisations whose initial proposals meet with approval will then be able to file a formal application between 16 September and 31 October 2022.

The projects must take place in Africa. All 54 countries of the continent are eligible, apart from red zones defined by the Ministry for Europe and Foreign Affairs. In line with the AFD and Paris 2024’s priorities, particular attention will be paid to projects targeting vulnerable groups of people, and countries or regions in a difficult situation.

Winners can receive up to €40,000 per project, covering up to a maximum of 75 % of the overall budget for the project.

Tony Estanguet, President of Paris 2024: ‘The winners of the Impact 2024 International call for projects are, in their own right, contributors to the legacy of the Games Paris 2024. Alongside the AFD, we firmly believe that sport can change lives all over the world, helping to promote education, health, inclusion, equality and the environment. A big thanks to the associations who, every day, prove the truth of that vision.’

Rémy Rioux, Chief Executive of the AFD: ‘To bring about a positive impact through sport, in fields such as education, gender equality and health: that is the ambition of the twelve winning projects, which the AFD is proud to support, in partnership with Paris 2024, through Impact 2024 International. Together, we continue to put sport into development, and put development into sport, to achieve the Sustainable Development Goals in Africa. For the world we all share.’ 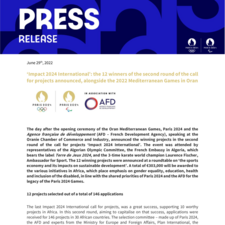 Impact 2024 International_the 12 winners of the second round of the call for projects announced, alongside the 2022 Mediterranean Games in Oran.pdf