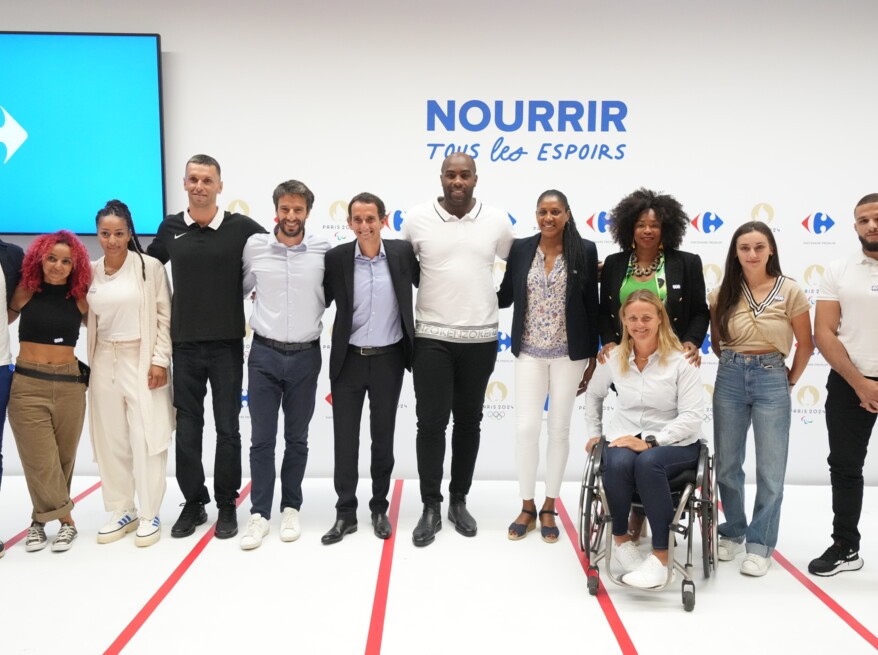 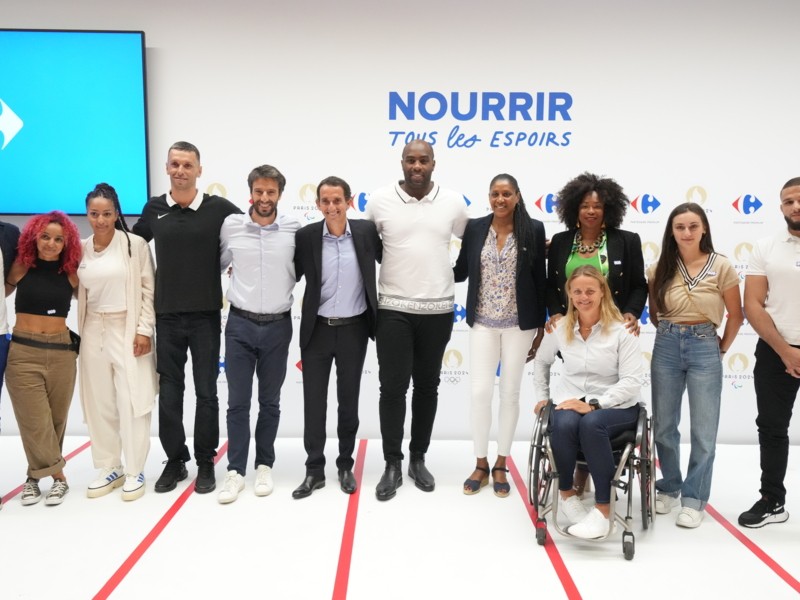 The Carrefour Group has become a premium partner of the Olympic and Paralympic Games Paris 2024. Alexandre Bompard, Chairman and CEO of the Carrefour Group, and Tony Estanguet, President of Paris 2024, signed the partnership agreement which, for the first time in the history of the Games, sees a world leader in food distribution involved in the greatest sporting event on the planet.

100 years since the Games were last held in Paris, Carrefour, with its iconic blue, white and red branding, at the heart of French people’s daily lives, is delighted to be contributing to this exceptional event for the whole of France.

The intention is for this partnership to spread to other countries around the world. At its heart is one of Carrefour’s key strategies: to bring about a food transition for all. The Group has a unique ability to bring all French people together around this gigantic celebration of sport through its 5000 stores and e-commerce sites. In addition, the Group is wholeheartedly committed to the values of Paris 2024, and is fully on board with the goal of organising Olympic and Paralympic Games which are sensible, sustainable and inclusive.

Operating under the tagline “Nourishing every hope”, the partnership is divided into:
- a project to supply fresh produce and organic food (fruit, vegetables, cereal products, meat, fish and seafood) to the Olympic and Paralympic Villages for the athletes’ meals, offering exposure for top-quality French produce, whilst also promoting more sustainable eating.
- a branding project which, through the values of sport, promotes health through diet, the value of work, social betterment and inclusion;
- a business project involving all our partners and franchisees, raising awareness of disability, nutrition, health at work through sport, etc.
- a commercial project, involving numerous promotions. Carrefour will develop exclusive collections in a wide range of official products licensed by Paris 2024 (clothing, stationery, back-to-school collections, etc.).

Alexandre Bompard, Chairman CEO of the Carrefour Group, said: “Soon, the heart of our country will be beating to the rhythm of the Olympic and Paralympic Games Paris 2024. It will be a historic event for all French people, with the eyes of the entire world fixed on Paris. With its popular presence, its 5000 stores in France, and its blue, red and white logo, the Carrefour Group wishes firmly to contribute to the success of this huge celebration of sport, help all French people to take part, and associate our brand with the marvellous values of Paris 2024. It is with great pride that the Carrefour’s 150,000 employees in France take part in this adventure.”

Tony Estanguet, President of Paris 2024, adds: “By welcoming Carrefour on board with the adventure that is the Olympic and Paralympic Games, Paris 2024 is reaffirming its desire to organise Games that are helpful to people and closely involved with their lives. Being among the largest networks of local businesses in France, Carrefour will help bring the magic of the Games to life for French people. Sport, health, commitment to healthy and sustainable eating, and inclusion: Carrefour shares our values and our desire to leave a legacy which is useful to society.”

About the Carrefour Group

With a multi-format network of over 13,000 stores in nearly 40 countries, the Carrefour Group is one of the world’s leading food retailers. Carrefour had a turnover of €81.2 billion in 2021. Its network of integrated stores employs over 370,000 people, helping make Carrefour the world leader in the food transition for all. Every day, they provide quality food, accessible everywhere are for a reasonable price. Globally, over 500,000 people work for the Carrefour brand. For more information, see www.carrefour.com, Twitter (@GroupeCarrefour) and LinkedIn (Carrefour). 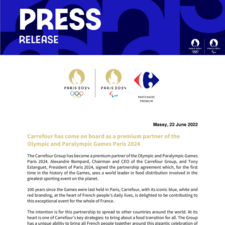 Paris 2024 - Carrefour has come on board as a premium partner of the Olympic and Paralympic Games Paris 2024.pdf 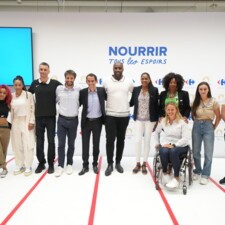 Carrefour has come on board as a premium partner of the Olympic and Paralympic Games Paris 2024.JPG