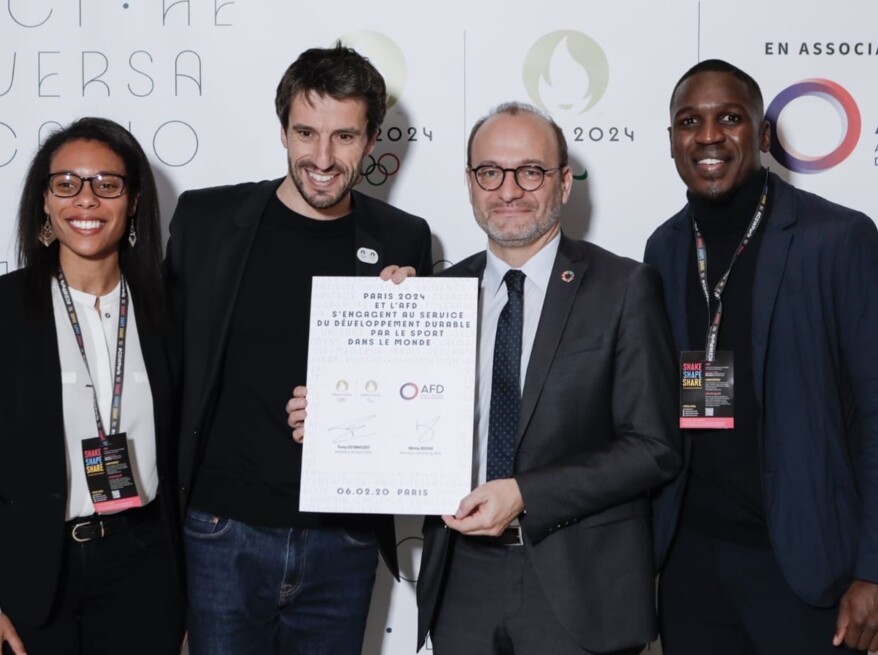 Agence Française de Développement and Paris 2024, a new form of cooperation for sustainable development through sport across the world

Paris, 6 February 2020 – Remy Rioux, Chief Executive Officer of Agence Française de Développement, and Tony Estanguet, President of Paris 2024, announced the signing of a cooperation agreement between both organisations to initiate and support projects that combine sport and sustainable development, in France and around the world.

Paris 2024 and the Agence Française de Développement will thus realise a mutual ambition: to put the energy of the Games for the benefit of all, in France and around the world. Featuring a national and an international component, this collaboration agreement is unprecedented in the history of the Olympic and Paralympic Games, demonstrating the determination of Paris 2024 to organise Games aligned with the Sustainable Development Goals (SDGs), as defined by the United Nations.

The signature of this agreement marks the alliance of two organisations brought together by the shared belief that sport is a powerful lever for social and societal change. Through this commitment, Paris 2024 will roll out its Legacy and Sustainability Strategy and its activities in the fields of education, health, insertion, gender equality, disability and peace through sport beyond its national boundaries.

Support and Assistance for Sport for Development Projects

As of today, various concrete actions initiated under the framework of this agreement can be confirmed:

This agreement follows on from the first collaborative effort carried out by the Agence Française de Développement and Paris 2024 in association with the Dakar 2022 Youth Olympic Games Organising Committee - the first Olympic event to be organised in the African continent. As part of the "Dioko Alliance," led by Paris 2024 in conjunction with the IOC, the Agence Française de Développement has pledged to provide funds for the renovation of the main infrastructures to be used for Dakar 2022.

In addition to these activities, Paris 2024 and the Agence Française de Développement will raise awareness on the contribution of sport to sustainable development, so that it is more fully integrated into the agenda of international donors and international organisations. In particular, the Agence Française de Développement will encourage the wider ecosystem of development agencies and development banks to further incorporate "sport" components, derived from the Olympic and Paralympic Movement, into their activities.

Quote from Tony Estanguet, President of Paris 2024: "We are very pleased and proud to sign this cooperation agreement with the Agence Française de Développement. At Paris 2024, we are convinced that sport provides solutions to the major challenges of our time: education, equality, health, coexistence and so on. We are already working to make this belief a reality in France, by supporting existing initiatives and developing new projects with the actors committed to working alongside us. Because the Olympic and Paralympic Games are a great universal and fraternal celebration that is open to all people, we also want to leave a legacy beyond our national boundaries, so that sport can play its full part in sustainable and human development.”

Two athletes involved and present at the signing ceremony

In line with his commitment in the 19th arrondissement of Paris with the association Secteur Sport Education that he created in 2011, Souleymane plans to set up an academy dedicated to learning combat sports in his native country of Senegal. Through sport, he intends to offer young people support and a place where they can grow and be integrated well into society. He also aims to use this academy to foster exchanges between French and Senegalese sportspeople. Souleymane Cissokho will be able to be part of the incubator launched by the Agence Française de Développement and Paris 2024 to support, as of 2020, 24 athletes wishing to develop projects with a social and/or environmental impact in France and abroad.

Sarah Hanffou is a table tennis player and African Champion in 2010 with Cameroon. In 2006, she launched the association Ping Sans Frontières, now present in Cameroon, Burundi and Ghana. Sarah's association, which uses table tennis as an educational tool, could benefit from financial support under the €3 million call for projects dedicated to NGOs working for development through sport, being launched by the Agence Française de Développement and Paris 2024. Ping Sans Frontières could thus reach a new stage in its development, namely with a view to expanding its table tennis table manufacturing activities by relying on the skills and expertise of local craftsmen. 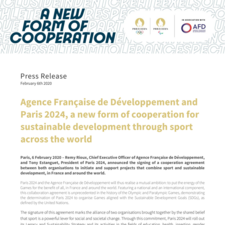